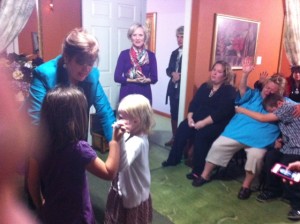 From the time of birth, Sharron has experienced the miraculous power of God, evident with the appearance of angels in the delivery room. Her entry was both traumatic and life threatening, but yet she was born whole and healthy, interrupting the enemies plan. Growing up in Oklahoma and Texas under the mentoring of her Father, John Wesberry, a devout man of God with Pentecostal roots; he spoke into her life from a very young age and led her to Jesus. She was taught through the word and by example to practice love and respect for God and others. And to be very sensitive to His presence in going before Him in prayer and repentance. As she yielded her heart to God as a child, she also received water baptism. This event was truly outstanding and well remembered, as happening in the atmosphere of an old fashioned tent revival with many people in attendance. When immersed under water and upon coming up, the Spirit of God met her with a tremendous surge of His presence through the power of the Holy Spirit. This presence was with her throughout her childhood and young adulthood as her Father John was gone much of the time. The demands of an itinerant worker took him from state to state. During these times of absence, Sharron again faced some very threatening and traumatic conditions, but her life was kept through the protective power of her “heavenly” Father who was ever present as she cried out in prayer.

Sermon prep and prayer as the Holy Spirit lead before a service in Dallas, Texas. Then the Miraculous took place as Sharron ministered the word along with the operation of the gifts of the Spirit.  Words of knowledge, prophecy, healing and deliverance; all through the supernatural power of God!

Very special were the times that she, along with her family, attended the miracle and healing crusades of the 50’s and 60’s. Sharron believes that this atmosphere of the miraculous was all a part of God’s divine order and plan which would prepare her for her ministry as a prophetic and healing Evangelist; impacting many lives. Over the years she has gleaned much from the teachings of other mature and powerful Apostles, and Prophets, who also spoke into her life about the ministry she walks in today; bringing healing, and preaching and teaching the word of God. But her launch forward came in the Spring of 1997, after a visitation from the Lord Jesus, as she was consumed by His presence and His mantle being laid over her. She had experienced a great, supernatural saturation of God’s peace, joy, and love. And the release of the anointing and the miraculous had changed her life forever that night, activating the Forerunner anointing. Soon after this experience, she became active in ministry in a much greater way. While having bible studies and prayer groups in her home, she began work as a director of a women’s ministry, organizing and hosting a conference which she promoted through media sources. In 2001 Sharron founded the evangelistic ministry. She well recognized the mantle’s significance from the miraculous impartation in 1997, to the far reaching and end-time revelation of the mantle of God’s glory, (the mantle of His Spirit); which would cover the earth and impact lives for eternity through this supernatural and evangelistic thrust.

From the beginning she realized the importance of being totally dependent on and sensitive to the leading of the Holy Spirit in delivery of messages, and for the moves of the Spirit within the miracle services. People were drawn as word went out through the medias, but especially as the breath of God, blew the wind of favor upon the ministry. As she faithfully organized and met with the intercessory prayer team, God rewarded her work with powerful, anointed services; and people being filled with His Spirit, healed, saved, and encouraged. The establishment of a strong intercessory prayer team proved to be an 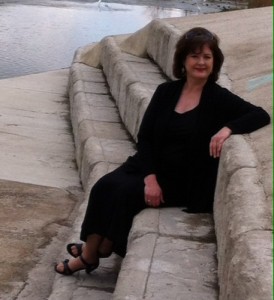 Trinity River in Fort Worth, Texas.  This is where Sharron’s Angel Visitation took place along with another supernatural experience in December of 2005.  A memory that will forever stay in her heart.

anchor for the ministry. God is pouring out His Spirit, and as Sharron ministers the Gospel of Jesus Christ with miracles, signs, and wonders following, her desire is to see people receive new hope, healing, and visions fulfilled for their destinies in God. She shares her testimonies and experiences as one who has persevered through many fiery trials and fears but who is also a living testimony of the faithfulness of God. Through the maturity and anointing of the Prophet, and with the Holy Spirit’s power, she is able to impart individually, and corporately, life-giving words for those seeking the will of God for their lives. Known for detailed accuracy and her words coming to pass, she receives ongoing testimonies from those she ministers to.

This ministry continues to move in and towards the fulfillment of the vision God spoke to Sharron’s heart in bringing the saving and healing knowledge of Jesus Christ to peoples lives, while spreading revival fires. And broadcasting of this ministry to the nations with the help of the media ; and with the goal of reaching as many souls as possible for the Kingdom of God.  A strong anointing has been placed upon her life, a pearl of great price. Through much prayer, and a solid commitment, Sharron works passionately following the heart of Christ to fulfill a work of excellence.